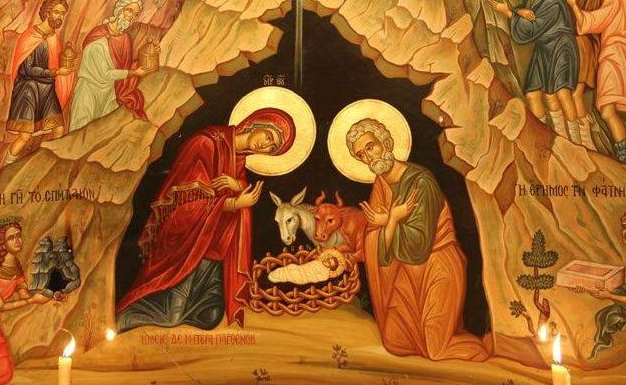 The Lord Jesus did not simply appear as an adult and go immediately to the Cross.

Besides the Cross and Resurrection, to be fully biblical, there is (at least) another reality, that we must keep in mind when believing, contemplating and proclaiming the Gospel of Jesus; and that is, the identity of Jesus at his birth. Indeed, this identity of Jesus is foundational to our understanding of what the Cross, Resurrection, Ascension, Pentecost and the Second Coming mean and how they have their effect. It is that identity to which I’d like to speak. So for the Feast of the Nativity (Christmas), I’m writing a series of four meditations, one from each of the Gospels, on the Incarnation—the Enfleshing of the Eternal Son of God. This current meditation serves as an introduction to that series.

(While we will fix our orbit around the opening chapters of each Gospel it should be noted that in becoming Man, Jesus lived an entire human life. Therefore, when speaking of the Incarnation we realize it is dynamic, and not just a onetime event.)

An essential part of the Apostolic understanding of Jesus’ identity is in the understanding of the covenant faithfulness of God. God redeeming Israel, and through it, all the world, while setting up His kingdom as fulfillment of the promises to Abraham, all the Prophets, and even Adam, is the essence of the Apostle’s Gospel. “I confess to you, that according to the Way, which they call a sect, I worship the God of our fathers, believing everything laid down by the Law and written in the Prophets…” (Acts 24:14) This redemption, though worked out in time, existed before the world was. Jesus’ absolutely essential and pivotal identity, and role, to that Gospel was also before the world was. “[Christ] was foreknown before the foundation of the world but was made manifest in the last times for the sake of you.” (1 Peter 1:20)

What then from the New Testament (since that is where the revelation of Jesus is given) are we told about his identity? What are we given as a canvas for our hearts on which to paint with the glorious colors of the Gospels the portrait of Jesus that God would have us to see? Of the several threads given, there are 3 threads interwoven in the text of the NT to make that canvas for our purpose concerning the Incarnation; without which, our portrait will be skewed.  They are:

The Old Testament is relentlessly monotheistic. “Hear, O Israel: The Lord our God, the Lord is one.” (Deuteronomy 6:4).  There is only one God, and he has created all things. “Thus says the Lord, your Redeemer, who formed you from the womb: “I am the Lord, who made all things, who alone stretched out the heavens, who spread out the earth by myself.” (Isaiah 44:24). Yet in the opening statements of the Letter to the Hebrews we read, “[God’s] Son…through whom also [God] created the world…” (Hebrews 1:2). We are given revelation that is through the Son, God created. Not only is the Son the means of creation, this Son is the one who sustains the universe. “[God’s Son] upholds the universe by the word of his power.”  (Hebrews 1:3) And notice it is as Son that he was the agent of creation. It was not through God’s idea/plan of bringing the son into existence, but God creating through the Son who existed before creation. This then is a personal preexistence.

This is how the Apostles understood their monotheism in relation to the Father and the Son. The oneness of God is in the singular nature of God because of the Person of the Father, not in the Father alone being God while the Son is not, nor in the Person of the Son being identical to the Person of the Father, nor in the Son and the Father merely forming a council or unit called God. This is one reason why in Mark 12:32-34, when the scribe agreed with Jesus that the greatest commandment was to love the one God, that Jesus said he was not far from the kingdom; still, he was not yet in the kingdom. The oneness of God, in the Incarnation of the Son, is revealed to be more than numerical personal precision. It is the oneness of nature and being, not of person, just as we all are share one humanity because of our nature as human beings, yet are all separate persons.

The Goal of Humanity:

Adam was created as the father and source of our human race. Because of, and in him, all humanity plunged into sin and death and the image of God in humanity, while not obliterated, was severely marred. It is from this darkness, this marred Divine image, from which God set out to rescue us. How did God rescue us? By sending Jesus as a fulfillment to his words to Abraham. “[B]ehold, the word of the LORD came to Abraham: ‘..your very own son shall be your heir.’” (Genesis 15:4). This covenant in turn also is a fulfillment to Adam’s plight because of the serpent. “The Lord God said to the serpent…I will put enmity between you and the woman,

and between your offspring and her offspring…” (Genesis 3:14-15). As it is written, [W]hen the fullness of time had come, God sent forth his Son, born of woman, born under the Law…”(Galatians 4:4). Notice, in reverse order, that Jesus was a Jew in fulfillment to Abraham through Moses, that he was a man in fulfillment to what was pronounced in the Garden with Adam, and that he was the Son sent forth from God. This traces God’s faithfulness backwards in time from the present (from Paul’s perspective) into eternity past. And in that eternity past, Paul finds the Son of God. He did not become Son at his birth or elsewhere. He was sent from God as Son.

In fact, revealing a mystery, Paul tells us Jesus was always the goal of what it would mean to be human. “Adam was a [foreshadow] of [Jesus Christ,] the one who was to come.” (Romans 5:14). Adam as our source was a foreshadowing of Jesus being our source, even in the flesh. In Christ Jesus, God takes on flesh precisely because that is where the problem is, in the flesh of Man. God doesn’t need to be satisfied. We need to be reconciled, redeemed, and restored in such a way as to render us recreated to share in the life of God. So, in the flesh of the God-Man Jesus, the gap not only of sin (Cross) and death (Resurrection) are overcome, but also the bridge between created and Uncreated, again, that, by the Spirit, we may have union with God the Father the way the Son does. As it is written, “God has sent the Spirit of his Son intoour hearts, crying, ‘Abba! Father!’” (Galatians 4:6)

How are we recreated? How is the image that was marred restored? As Hebrews 1:3 said the Son is, “the radiance of the glory of God, the exact imprint of his nature”, so Paul asserts that the Son is, “the image of the invisible God.” (Colossians 1:15a) In Christ, the original Image in which we were made comes, and we, through faith and baptism into Christ, are restored. And the first step towards this is in the Incarnation of the Son, the Image of the Invisible God.

In the 4th century, in his essay On the Incarnation, chapter 13, St. Athanasius the Great says it this way, “For neither by human beings was it possible [to renew the image in humanity], since they were created “in the image”; but neither by angels, for they were not even images. So the Word of God came himself, in order that he being the Image of the Father, the human being “in the image” might be recreated.” For us to be restored, that is, saved, Jesus couldn’t be a mere man. Neither could he be some other highly exalted created being, angel or otherwise. Jesus could only be the Uncreated Eternal Image of God in the Flesh.

From here, my goal in the Gospel meditations is to explore how each Gospel presents in its own way that same identity – that Jesus is, as the Eternal Son of God, the God of Israel made truly human, for mankind to have union with God. One of the hymns of the Church captures perfectly the joy of this: “Today the Virgin gives birth to the Transcendent One, and the earth offers a cave to the Unapproachable One! Angels, with shepherds, glorify Him! The wise men journey with the star! Since for our sake the Eternal God is born as a little child.”

Christ is born! Glorify Him! Alleluia!