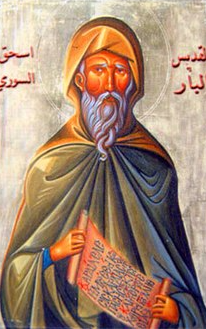 “The sum of all is God, the Lord of all, who from love of his creatures has delivered his Son to death on

the cross. For God so loved the world that he gave his only begotten Son for it. Not that he was unable

to save us in another way, but in this way it was possible to show us his abundant love abundantly,

namely, by bringing us near to him by the death of his Son. If he had anything more dear to him, he

would have given it to us, in order that by it our race might be his. And out of his great love he did not

even choose to even urge our freedom by compulsion, though he was able to do so. But his aim was

that we should come near to him by the love of our mind. And our Lord obeyed his Father out of love

theologian who wrote extensively on the inner life. Early in his life, Isaac and his brother joined a

monastery and shortly thereafter Isaac became known for his teaching and devout life. He was made

Bishop of Nineveh, but abdicated after five months to devote himself to writing and study in the desert.

He was known for his austere way of life. Isaac stands in the Eastern mystical tradition and his writings

place an emphasis on the work of the Holy Spirit.

Submitted by The Chapel of the Advent