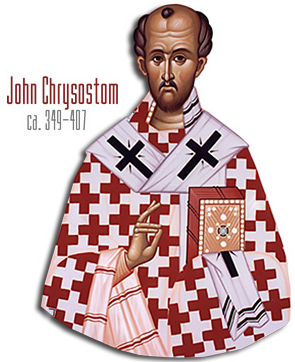 Jesus then did not need baptism, nor did that washing have any other object than to prepare for all others a

way to faith in Christ. For [the Baptist] did not say, “that I might cleanse those who are baptized” or “that I

might deliver them from their sins” but “that he should be made known to Israel.” And why, tell me, could he

not have preached without baptism and still brought the multitudes to him? But this would not have made it

any easier. For they would not have all run together like they did, if the preaching had been without baptism.

They would not by the comparison have learned his superiority. The multitude came together not to hear his

words, but for what? They came to be “baptized, confessing their sins.” But when they came, they were taught

the matters pertaining to Christ and the difference of his baptism. Yet even this baptism of John was greater

dignity than the Jewish one, and therefore all ran to it; yet even so was it imperfect.

Homilies on the Gospel of John, St. John Chrysostom (Ancient Christian Commentary on Scripture Vol. 4A,

Submitted by the Chapel of the Advent

Chrysostom (the golden mouthed) is remembered as the greatest preacher in the history of Christianity. Born

in Antioch around 349 ca. he studied Greek and Classical culture as a youth and was particularly drawn to the

lectures of Laibanius, an ardent advocate of the paganism of Rome and one of the prominent orators of his

age. An encounter with Bishop Miletius of Antioch in 367 changed the direction of Chrysostom’s life and he

soon experienced a conversion and was baptized three years later.  Shortly thereafter he was ordained lector

but the desire for a more perfect life drew John into one of the ascetic societies that was located near Antioch.

Later he lived alone in a cave, but poor health forced him back into the city where he was ordained deacon in 381

and priest in 386. He was made the Bishop of Constantinople, the capital of the empire in 386. He soon began a

series of reforms, many of which were unpopular. Some of his reforms and sermons were directed against the

imperial court and led to two periods of exile. The severe conditions of the second exile led to his death in the year 407.

His most famous work was On the Priesthood.