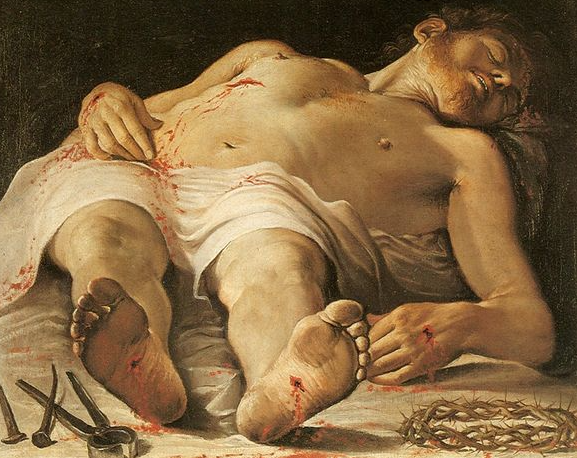 Joseph bought a linen shroud, and taking him down, wrapped him in the linen shroud and laid him in a tomb that had been cut out of the rock.
And he rolled a stone against the entrance of the tomb. (Mark 15:46)

We all know that Jesus died. “‘Father, into your hands I commit my spirit.’ And having said this, he breathed his last” (Luke 23:46). But what happened after he died? We know that his body was laid in Joseph’s tomb, but what about his human soul?

Reflecting on this question not only sheds light on the Bible’s teaching about death and the afterlife, but it also is a great encouragement to us, who must face death and seek to do so without fear.

First of all, what exactly is death? Death is separation, a dividing of things that ought to be united. Fundamentally, it is separation from God. Paul suggests as much in Ephesians 2:1: “You were dead in the trespasses and sins in which you once walked.” To walk in sin is to be dead, to be enslaved to dark powers, to be separated from God, to be children of his wrath. This type of separation is an estrangement, a hostility, an alienation from the life and hope of the living God. In this sense, all of us, by nature, are born dead, and it is this death that Jesus endured in his suffering on the cross.

But of course, death is more than just separation from God. Death also marks the separation of the soul from the body. God made human beings to be embodied souls and ensouled bodies, and death rips this union asunder. But what happens to these two parts after they’re separated? Psalm 16:10 gives us a window into the biblical teaching.

This passage directs us to the normal account of what happened when a human being died prior to the death and resurrection of Jesus. The soul was abandoned “to Sheol,” and the body saw corruption or decayed.

In Acts 2:29–31, Peter tells us that David, in writing this psalm, foresaw the resurrection of Christ, “that he was not abandoned to Sheol (that is, his soul wasn’t), nor did his flesh see corruption” (notice that Peter reads the second line as a reference to Jesus’s body or flesh). Thus prior to Jesus, at death, souls normally went to Sheol, and bodies (flesh) decayed. We’re all familiar with the latter, but the former is more opaque. A quick Bible study will show us why Peter thinks that David’s prophecy in Psalm 16 is such good news.

In the New Testament, the most extended depiction of the afterlife is found inLuke 16:19–31. There we learn that, like the Hades of Greek mythology, the biblical Sheol has two compartments: Hades proper (where the rich man is sent, Luke 16:23) and “Abraham’s bosom” (where the angels carry Lazarus, Luke 16:22). Hades proper is a place of torment, where fire causes anguish to the souls imprisoned there. Abraham’s bosom, on the other hand, while within shouting distance of Hades, is separated from it by a great chasm (Luke 16:26), and is, like the Greek Elysium, a place of comfort and rest.

While much mystery remains, the picture begins to take shape. All dead souls go down to Sheol/hades, but Sheol is divided into two distinct sides, one for the righteous and one for the wicked. The righteous who died prior to Christ dwelt in Sheol with Abraham, and though they were cut off from the land of the living (and therefore from the worship of Yahweh on earth), they were not tormented as the wicked were.

Where Did Jesus Go When He Died?

Following his death for sin, then, Jesus journeys to Hades, to the City of Death, and rips its gates off the hinges. He liberates Abraham, Isaac, Jacob, David, John the Baptist, and the rest of the Old Testament faithful, ransoming them from the power of Sheol (Psalm 49:15; 86:13; 89:48). They had waited there for so long, not having received what was promised, so that their spirits would be made perfect along with the saints of the New Covenant (Hebrews 11:39–40; Hebrews 12:23).

After his resurrection, Jesus ascends to heaven and brings the ransomed dead with him, so that now Paradise is no longer down near the place of torment, but is up in the third heaven, the highest heaven, where God dwells (2 Corinthians 12:2–4).

Now, in the church age, when the righteous die, they aren’t merely carried by angels to Abraham’s bosom; they depart to be with Christ, which is far better (Philippians 1:23). The wicked, however, remain in Hades in torment, until the final judgment, when Hades gives up the dead who dwell there, and they are judged according to their deeds, and then Death and Hades are thrown into Hell, into the lake of fire (Revelation 20:13–15).

Good News for Us

What implications does this have for Holy Week? Christ’s journey to Hades demonstrates that he was indeed made like us in every way. Not only did he bear the wrath of God on our behalf; he endured death, the separation of his soul from his body. His body was in Joseph’s tomb (Luke 23:50–53), and his soul was three days in Sheol, in the heart of the earth (Matthew 12:40).

But as Psalm 16 makes clear, Jesus is not only like us, but different. Jesus’s body was buried, like ours, but it did not decay. Jesus’s soul went to Hades, like the Old Testament saints, but wasn’t abandoned there. God raised him from the dead, reunited his soul with a now-glorified body, so that he is the firstfruits of the resurrection harvest.

And this is good news for us, because those in Christ now bypass the land of forgetfulness, where no one praises God. Instead, when we die, we join with the angelic choir and the saints of old to sing praises to the Lamb who was slain for us and our salvation.